Emma Forth "The Development of Early Cinema in the United Kingdom, 1909-1918: A Four Nations Study" 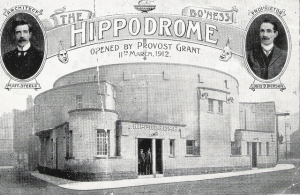 This project explores the rise and role of purpose-built British cinemas in 1909-1918, through a social and cultural analysis of the decade. This understudied period – encompassing passage of the 1909 Cinematograph Act regulating the British industry for the first time, to the end of the First World War – saw cinema become the most popular form of commercial mass-entertainment in Britain. This decade developed both the social role of cinema and the consumption of film within local communities in Britain. Scholarship on early cinema, 1895-1927, is often nation-specific and chronologically divided with the outbreak of the First World War as the break point. This project, however, provides a comparative analysis across all four nations of the United Kingdom, aiming to provide a greater understanding of the central decade of this period of leisure practice modernisation.
This paper will outline the aims of my project, as well as presenting initial research findings. Thus far, I have created the first database of British and Irish early cinemas using trade directories, and mapped these locations. This visually depicts the geographic spread of British and Irish cinemas in 1914 at the height of British cinema’s first wave. By using the location of cinemas as a starting point, this project will seek to explore the circumstances surrounding the development of this new leisure practice, and assess the social and cultural implications of cinema-going within British communities, from cities to small towns alike.

I completed my undergraduate degree in History at the London School of Economics and Political Science in 2014. I then took a break from education, working as a risk analyst, running the admissions department in a high school, and as a receptionist and volunteer at Gladstone’s Library, Hawarden. I returned to university in 2018, completing my MSc in History at the University of Edinburgh, before staying on to start my PhD from September 2019. My project looks at the development of early cinema across all four nations of the United Kingdom, 1909-1918.