Monique Toppin ‘Cinemagoing and the Politics of Space in Little Nassau during the 1950s’. 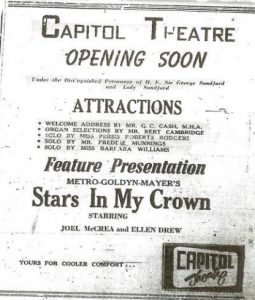 Considering the unwritten code of segregation within the city of Nassau prior to and during the 1950s, it is not particularly surprising that the cinemas would have instituted some form of racial demarcation to appease social nuances of that time. My presentation focuses on the influence of racial discrimination and its impact on cinemagoing. It examines the politics of space in the cinemagoing experience and peers through the lens of the interviewed narrators to deconstruct the memories of their experiences and observations in the context of race within the place of the cinemas in Nassau. It also looks at their attendance of other public places that encompassed the geographical area and socially allied ‘space’, which permeates the collective impression of their cinema experience during that period.

My talk will highlight ways in which the racial divides influenced the daily life and attitudes of the narrators during that epoch and evaluates the racial impressions left on the contrasting memories of the racially mixed narrators. Finally, I will briefly assessess the cinema experience in the 1950’s as a social structure to determine the ways in which it functioned as a ‘third place’, a place that is different from home or work, and a “social anchor of community life” (Harris, 2007, p. 147), especially for young Bahamians residing in Nassau in this post war colonial era