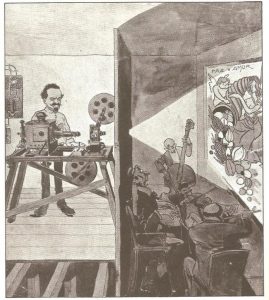 The next HoMER webinar will take place on Monday 5 October, 5pm (UK time). Our speaker will be Rafael de Luna Freire (Federal Fluminense University), who will present on ‘”Is the film projector in the right place?” Back projection as a regular practice in Brazilian movie theatres of the silent era’.
Please register for this event here: https://durhamuniversity.zoom.us/meeting/register/tJIuf-2orz0rEt1KUsLYOBWel5ObU-nRYPq7
After registering, you will receive a confirmation email containing information about joining the meeting via Zoom.
The speaker will present a 20-minute paper, followed by discussion and Q&A.
Abstract
There are two basic kinds of film projection. In the case of the classic “cinema situation”, a projector is located at the back of the audience while it projects a film to a reflexive screen in front of the spectators. However, in a different situation, a projector located behind the screen can also project a film to a translucent screen for an audience in the opposite side.
In the US, the back projection – also called “rear-projection” or “background projection” – is a practice considered by film historians only as a now obsolete special effect. However, this presentation will focus on the widespread use of back projection in Brazilian movie theaters for regular film screenings during the silent period. Showing evidence of the use of this system of projection in many movie theaters from different cities of Brazil in the 1910s and 1920s, we will discuss its origins and consequences.
Evidently, we can trace the practice of rear-projection back into the phantasmagoria presentations of late 18th century, for example. Nevertheless, why in Brazil did this system of projection became so widespread, even if film historians, until very recently, have never acknowledged this practice? If in France the “projection par transparence” was a regular practice, our hypotheses is that the influence from French film culture at that time is what explains its adoption in Brazil. However, what were the specific conditions of Brazilian film culture that motivated back projection to become such a common practice in this particular national context? Was it a question of safety? Was it a result of the typical urban organization of lots in Brazilian cities? Finally, what were the consequences of its wide adoption? What changes in the film spectacle may have resulted from the need for a constant (therefore wet) translucent screen? This presentation intends to answer some of these questions.